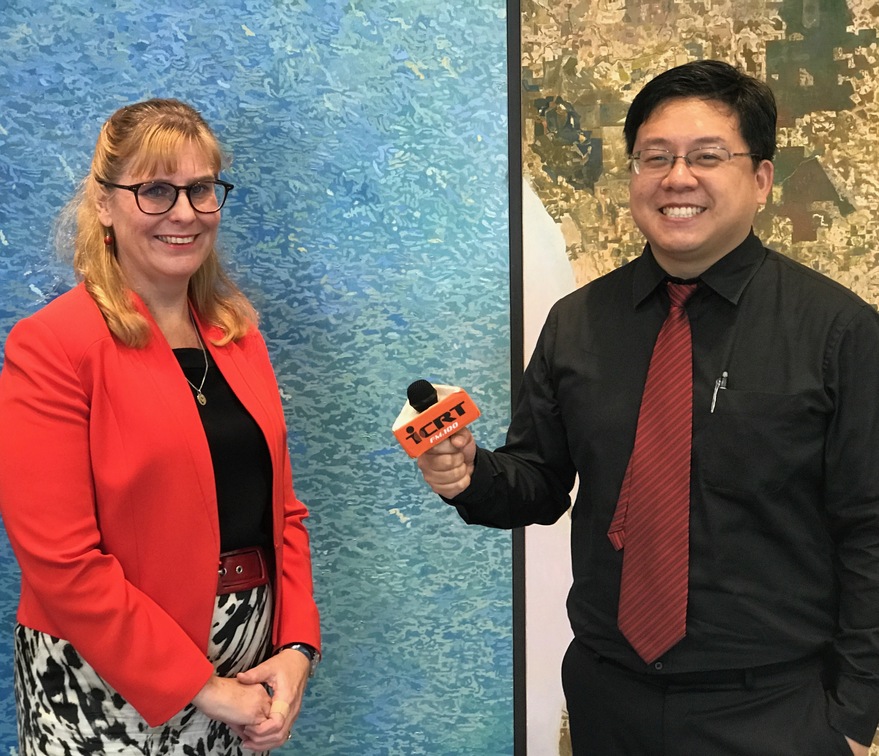 ICRT continues our exploration of the Taiwan government’s New Southbound Policy with the second episode of Looking South. The Australian Office, Taipei, was kind enough to invite Eric Gau and ICRT General Manager Tim Berge to their offices to interview Representative Catherine Raper in person.

In their talk, Eric and Representative Raper look at the existing extensive ties between Taiwan and Australia, and how they can be built on further to strengthen relations even more.

Transcript:
Eric Gau:  Hello everyone, I am Eric Gau, and you’re listening to “Looking South” here on ICRT. In this program, I examine the government’s New Southbound Policy, and what it would mean for Taiwan and its regional partners.

Today with me is Representative Catherine Raper of the Australian Office, Taipei. Miss Raper, thank you so much for taking the time to speak with us.

Catherine Raper:  It’s a pleasure to be here, Eric.

Eric:  Jumping straight in, trade ties between Taiwan and Australia, they are already quite substantial. How do you expect the New Southbound Policy to affect that and what suggestions do you have for the Taipei Government on where it can focus its efforts?

Catherine:  We already have a very substantial base to build on. So I think what we can do with the New Southbound Policy is look at areas where we already have good connections and strengths, and look for ways that we can take them a step further.

We might be able to explore, taking that little step further. For example, we can find ways to promote student mobility in the vocational and education sector. We might also look if we can have some recognition of qualifications. Looking at ways that students studying in every of our economies will be able to have easier recognition of the qualification they gain at the end of their course.

This is a project whereby Taiwan lychees are going to go to Australia, to the Australian side of Queensland and be growing in Australia counter seasonally to their growing season in Taiwan. This thereby extends the growing season for Taiwan lychees, but also brings new technology and new varieties to the Australian farming community. It’s a real example of a win‑win collaboration that we can look to do some more of.

Eric:  Going back to that vocational training you mentioned, Taiwan and Australia already have a Working Holiday program in place, how popular has this program been and how can it be expanded in the future? At the same time, what else can be done to expand people to people exchanges become the two countries?

Catherine:  Yes the Working Holiday Maker program has been a really great example of a success story in the Australia‑Taiwan relationship. In the last year, 26,000 young Taiwanese came to Australia, and that’s an annual figure. We’ve had between 20,000 and 30,000 go every year for the last several years.

This is a big success story in many ways because this means you have a whole cadre of young people who have experience of living and working in Australia, who understand the Australian culture, Australian people, the Australian economy, and they’ll come back to their regular lives in Taiwan and whatever they end up doing that will be a really good foundation to work on going forward.

In terms of people to people links, it’s really building on that and an example coming back to Working Holiday Maker is that we built on is we held a photography competition, and basically we put out a call on social media for Working Holiday Makers from Taiwan who’d been to Australia to send us photographs.

We had an amazing response, 1,500 submissions. We ran then all in our Facebook page and I encourage all of you to go and have a look. The album is still there. And then we made an exhibition of their photographs and that’s been touring around Taiwan island.

This is a way of showing what Australia looks like through the eyes of Taiwan Working Holiday Makers, and It provides an opportunity for both those returnees to bring their family and friends and say, “Here’s what I did,” but hopefully also inspires young people to go and see it for themselves.

Eric:  In a similar vein, Australia is obviously an English speaking country and it’s always been a very popular destination for Taiwan students who are looking to expand education abroad. On the flip side, what can Taiwan do to make itself more attractive to students from other countries?

Catherine:  Yes, education is another very strong element of Australia‑Taiwan connections. Australia is the second most popular choice that Taiwan students are looking to study overseas. Second only to the US. Our enrollment numbers have been particularly driven by the Vocational Education and Training sector, I mentioned earlier.

We think increasing institutional links between Australian Universities and Taiwan Universities through the context of what’s called the New Colombo Plan. This is an Australian Government initiative that’s been running there for three years to bring Australian undergrad students out to the Indo‑Pacific region, including Taiwan to study and undertake internships.

Now, one welcome side effect of that has been that the institutions who have cooperated in those exchanges have begun to form stronger links. We’ve seen several of the institutions come back to Taiwan for academic exchanges or to sign MoUs, or to look at ways that they can increase their interaction. So I think that’s something that we should promote, and then we’ll help Taiwan Universities.

Taiwan also has real strengths in Chinese language education. I think, doing more to promote that internationally will help bring people here. So I think it’s about ensuring that Taiwan Universities are internationally connected and offering programs that are attractive and interesting to international students.

Catherine:  The New Southbound Policy does contain a really welcome thread on cultural exchanges and one we certainly came to continue to explore. We already have a very strong history of bringing Australian arts and culture to Taiwan, and it’s extremely well received here.

The Taiwan community has a very thriving arts and culture scene and a very enthusiastic audience population, so we always do very well when we bring Australian performers or exhibitions here, and we continue to do that.

B2M is a great example because it was a collaboration. It wasn’t just one person’s idea. It was many people working together on both the Australian and the Taiwan side. We brought them to Taiwan and they did several performances including the Pulima Festival, which was very successful.

Importantly, they also tour the island and they are really connected with indigenous culture. They are able to go and meet with local indigenous tribes, do workshops of university students and sample some of Taiwan’s indigenous music and culture.

Using a collaborative activity with funding from several sources to promote linkages such as that is something I definitely believe that we should be doing more of. Of course, indigenous culture is very rich and makes a wonderful contribution, but the Australian also exist beyond that.

We’ve had success in other areas as well. For example, we did a recent program with Surf Lifesaving Association where we brought Queensland Surf Lifesaving representative to Taiwan to meet with Taiwan counterparts.

We did a program promoting Australian approaches to beach safety and beach culture to encourage a more mature approach to how you can promote safety at the beach by encouraging people to use the beach but to use it wisely and safely and to approach it in a sense where you are engaging with it, and not fearful of going in there in the sea.

That’s been really helpful. We also do a lot in the visual arts, a lot in dance, a lot in performance right across the cultural spectrum, and we do find that these sound help increase linkages between Australia and Taiwan.

Eric:  We’ve been speaking with Representative Raper of Australian Office, Taipei. Miss Raper, thank you again for joining us today.

Catherine:  It’s been a pleasure. Thank you very much, Eric.

Eric:  That’s it for this installment of Looking South here on ICRT. I’m Eric Gau. Thank you all for tuning in.